'Jeans have become an American tradition, symbolizing the vitality of the West to people all over the world.'

Printed on the pocket inside Levi's® jeans

The word denim is an Americanization of the French name "serge de Nimes," a fabric which originated in Nimes, France during the Middle Ages. In 1864, Webster's dictionary listed the shortened English version: DENIM.1


Italian sailors from Genoa wear cotton trousers and the French call Genoa and the people who live there, "Genes." The name "jeans" was applied to the pants as well.


The word dungarees (usually plural) is one of the few mainstream English words to have come from Hindi, one of the major languages of India. The source word in Hindi is dungr?, and refers to a type of coarse cloth.


In English, dungaree is usually used to refer specifically to blue denim fabric, and in plural to refer to clothes, especially trousers, made of such material.


48% of the world's trade in fabric is in cotton, from which denim is made.2


At least 225 pair of denim jeans can be made from one bale of cotton.2


The orange thread traditionally used to sew Levi Strauss blue jeans was intentionally selected to match the copper rivets that doubled the durability of the jeans.3

A Bit of History

The Last Chance Mine (1882).
Men working on coal mines in their Levi's? durable pants. 3

19th Century America - The difference between Denim and Jean Fabric


Denim fabric seems to have been reserved for work clothes, when both durability and comfort were needed. Common uses included overalls made of blue denim, worn by mechanics and painters.


Jean fabric was a sturdy fabric, but it did not offer the added benefits of denim, such as durability and comfort. Common uses included topcoats, vests or short jackets, and fine trousers in chestnut, olive, black, white and blue jean.


The U.S. Navy introduced the bell-bottomed trouser in 1817 to permit men to roll their pants above the knee when washing down the decks, and to make it easier to remove them in a hurry when forced to abandon ship or when washed overboard. In 1901 regulations authorized the first use of denim jumpers and trousers, and the 1913 regulations originally permitted the dungaree outfit to be used by both officers and enlisted with the hat of the day. 4


Jacob Davis, a Nevada tailor, designed denim jeans with copper rivets at the picket corners to prevent seam tears. Unfortunately, Davis didn't have the money to apply for a patent to trademark his invention. 3


Bavarian-born businessman Levi Strauss had started a wholesale business in 1853 in California, supplying clothing to goldrush miners. Jacob Davis wrote him, asking him to pay for the paperwork. On May 20, 1873, they received a patent for the invention which included the ingenious pocket-rivet idea. Strauss and Davis began producing copper riveted "waist overalls" in blue denim fabric.3


In 1936, Levi Strauss sews a little red flag next to the back pocket of its jeans. It is the first label sewn on the outside of a piece of clothing. 3

Denim became popular with young people in the 1950's as a symbol of teenage rebellion, notably in movies such as Rebel Without a Cause and The Wild One. Some schools in the U.S. banned students from wearing denim fabric.


Until 1960, "waist overalls" was the traditional term used for denim pants. By the late 1950s, however, teenage wearers were calling them jeans, so Levi Strauss officially began using the name, too. 3


Denim has made a comeback in recent years and in every possible form. Studded denim jackets, jeans, long skirts, pleated minis and even shirts were heavily featured on the runways of Dolce and Gabbana, John Galliano, Mui Mui and Prada to name but a few.

Denim fabric is unique in it's connection with one color - blue.


The warp yarn is traditionally dyed with the blue pigment obtained from indigo dye. Indigo was the most significant natural dye known to mankind until the introduction of synthetic dyes, at the end of the 19th century. The durability of indigo as a color and it's darkness of tone made it a good choice, when frequent washing was not possible. In 1894, indigo was no longer needed - a synthetic dye process was perfected.


Over the years, many different denim fabric treatments have been introduced, including pre-washed, stone-washed, sandblasted,and vintage/dirty. 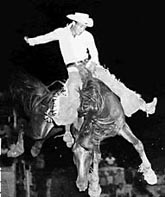 Museum of the American West, exhibit piece for "How the West Was Worn," 2004.

Blue jeans accommodated the lifestyle of the hard-workers such as miners, rancher, farmers, railroad workers, and teachers. Life out west was tough, work was hard, and days were long. Jeans were not made to be stylish. They were made to be durable. 5


Denim and buckskin clothing and shapes associated with frontiersmen and cowboys have continuously influenced public perceptions of the West and Westerners. 5


Movie star cowboys remained enormously popular from the 1930s through the 1960s. The new medium of television also adopted Western themes as mainstays of programming. Added into the mix were a host of singing cowboys, honky-tonk heroes, and country music superstars, all riding the trendy cowboy image to new heights of fame and fortune. Real cowboys became increasingly rare during the period.5


Western fashion has become the symbolic national folk costume of the United States, distinguishing America and Americans around the world. The cowboy image is rooted in the "rugged individualism," western wear and the pioneers. They made this style fashionable and are the source of inspiration for those shaping American identity at home and abroad.5

Join the club for more updates!